A lot has been said about class actions and whether or not they benefit the victims of wrongdoing. The point of this column is not to join that debate, but, instead, to provide putative class members with the information they should have concerning their rights to recover from class action settlements. While some information is available publicly, either on case-specific settlement websites or in class action settlement notices, most of that information is not designed to enhance claim filing or to maximize recoveries. And nowhere else is it all in one place. The link below addresses the various participants – the “players” – in the claims process. In subsequent installments, I’ll address such matters as the advantages of claims management, claim stimulation, the settlement process itself, and, finally, the value that highly competent and ethical class action claims management consultants, like FRS, provide to their clients. Then, armed with this information, it’s up to each claimant to determine whether or not it is better off retaining FRS to avoid missing or substantially undervaluing its opportunities to participate in the hundreds of millions of dollars of settlements recovered each year. 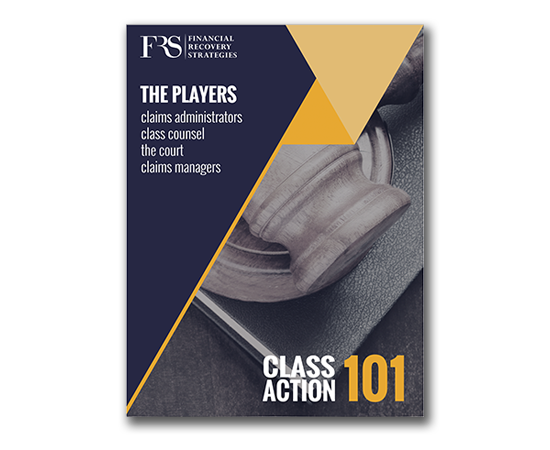 The next installment will address whether there is a difference between claims filing, on the one hand, and claims management, on the other. As will be explained, there are significant differences that any class member should consider before retaining a consultant.